In late December of 2019, an issue was brought to the attention of Bat World Sanctuary (BWS) in Texas by Second Chances Wildlife Center (SCWC) in Kentucky. The issue involved SCWC rescuing eight Egyptian fruit bats in Texas. BWS offered guidance and help as the bats were located in Texas. The BWS report is as follows:

On January 7th, 2020 we received a call from SCWC, who had just picked up their procured bats from what we then learned was the Mini S Exotic Zoo located in  Mineola, Texas, owned by Michelle Smith. SCWC reported to us that the remaining bats at the zoo desperately needed to be rescued before they entered the pet trade. The exhibit was closing in order to make room for an anteater.

The conditions they reported at Mini S Zoo were as follows (photos below):

SCWC took  8 bats, which left a total of 52 still needing help. This number included 10 Egyptian fruit bats and 42 Seba bats. We immediately called the zoo owner, Michelle Smith, to make arrangements to procure the remaining 52 bats. Although we never approve of purchasing bats, in order to get these bats out of their horrendous situation as quickly as possible and keep them out of the pet trade, we were forced to buy them. Michelle Smith described that the Seba bats were rare and possessed a black‐and‐white gene that could make us a “lot of money”.  Michelle Smith went on to say that all of the other black and white Seba bats she had died during a “temperature crisis”, which means the bats were not provided heat or air conditioning as necessary to protect them.  Michelle Smith also bragged that BWS is the only group who got adults, the others sold were all babies. All 52 bats were rescued on Thursday, Jan. 9th, 2020. The conditions at Mini S Zoo were as follows:

While we were in the middle of our rescue, Michelle Smith informed us that she had sold a young female bat from the group of Egyptians to a man in Missouri. Our hearts sank at this knowledge. Egyptian fruit bats form very strong family units for life. Offspring stay with their mothers for up to two years. We pressed Michelle, on a daily basis, in order to obtain the buyers contact information and we finally received it almost a week later. We then made arrangements to also get this one lone pup from MO to TX and thankfully, she is now with us and back with her family.

At Mini S Exotic Zoo, no consideration was ever given to these bats other than what profit can be made off of them. The animals we observed were confined to a dark, windowless outbuilding with no fresh air, food or water and nothing whatsoever to occupy their intelligent minds. But more is to fault besides animal dealers like Michelle Smith. USDA’s Animal and Plant Health Inspection Service (APHIS)  is sorely lacking in minimum standards for bats in particular, enabling places like the Mini S Exotic Zoo to get away with the mistreatment of bats. The Association of Zoos and Aquariums (AZA) is also to blame in that some of these zoos, even the accredited ones, allow bats to over-breed and then leak the excess into the pet trade as well as research.

Please join us in sending a message to both the USDA and the AZA
that leaking bats into research and the pet trade must stop! The 4’ wide x 8’ long by 10’ high bat enclosure that housed 60 bats who were severely overcrowded and unable to fly. Sharp twigs were the only cage furniture. The filthy floor of the bat enclosure showing a dish containing rotten apple slices, contaminated with feces and urine 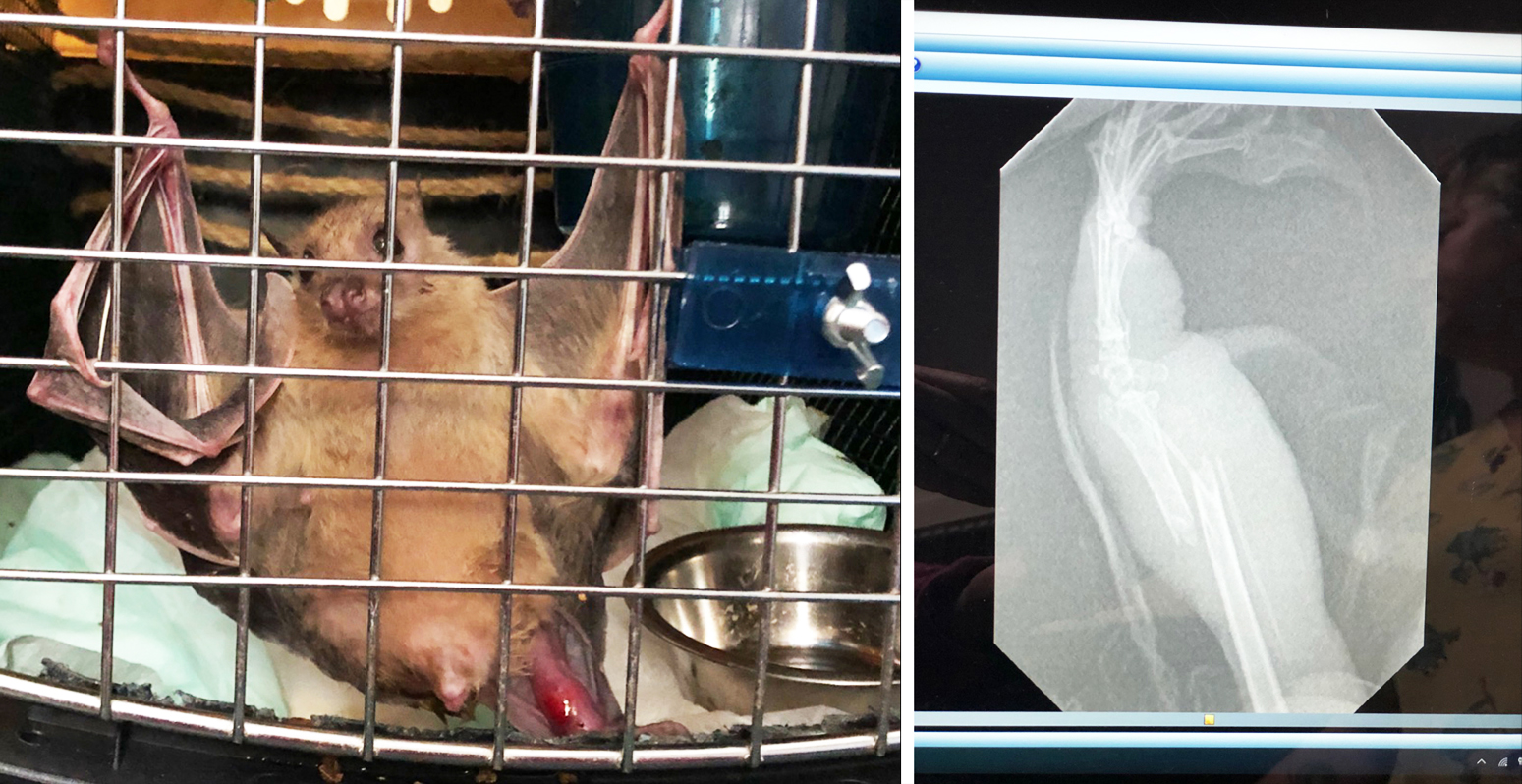 Left” An Egyptian fruit bat with one leg, which is broken and badly infected. The injury is being treated by SCWC in Kentucky. Right:A radiograph showing the severity of the break.

Left: The seba with her head trapped between the cage wire. Apparently she spent the entire night like this. Left: The injury caused to the bat with her head trapped. The skin on her scalp between her ears was peeled back and barely attached to her head but we were able to repair that section. The remaining injury to the back of her neck is currently being treated. We are so appreciative that we were in a position to get these suffering, abused bats to safety and out of harm’s way.  The males have been neutered and the mothers are being allowed to raise their babies and keep them for life. Many of the bats are still very frightened so our focus is making sure these beautiful beings understand they will not be going anywhere else; they truly are safe in their forever home with dozens of others just like them. They will be able to fly freely in indoor-outdoor enclosures and eat all of the nourishing food their little bellies can hold.  We have been offered two matching grants totaling $15,000 if we can raise that same amount. Please help us help these bats, and all the others still waiting to be rescued by donating here: